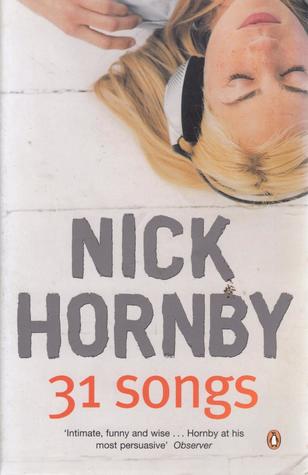 The personal essays in Nick Hornby's Songbook pop off the page with the immediacy and passion of an artfully arranged mix-tape. But then, who better to riff on 31 of his favorite songs than the author of that literary music-lover's delight, High Fidelity?

"And mostly all I have to say about these songs is that I love them, and want to sing along to them, and force other people to listen to them, and get cross when these other people don't like them as much as I do," writes Hornby. More than his humble disclaimer, he captures "the narcotic need" for repeat plays of Nelly Furtado's "I'm Like a Bird," and testifies that "you can hear God" in Rufus Wainwright's coy reinterpretation of his father Loudon's "One Man Guy" ("given a neat little twist by Wainwright Junior's sexual orientation..."). Especially poignant is his reaction to "A Minor Incident," a Badly Drawn Boy song written for the soundtrack of the film version of Hornby's book About a Boy. While Hornby was writing the book, his young son was diagnosed with autism--a fact that adds greater resonance to the seemingly unrelated song he hears much later: "I write a book that isn't about my kid, and then someone writes a beautiful song based on an episode in my book that turns out to mean something much more personal to me than my book ever did." Meandering asides and observations like this linger in your mind (just like a fantastic song) long after you've flipped past the final page.

The 11-song CD that accompanies the book is a great touch, but it's too bad it doesn't contain all of the featured songs--most likely the unfortunate result of licensing difficulties. Overall, Hornby's pitch-perfect prose, the quirky illustrations from Canadian artist Marcel Dzama, and a good cause--proceeds benefit TreeHouse, a U.K. charity for children with autism, and 826 Valencia, the nonprofit Bay Area learning center--add up to make Songbook a hit. Solid gold. --Brad Thomas Parsons

You're viewing: 31 Songs RM9.90
Add to basket
Shopping Cart
There are no products in the cart!
Subtotal
RM0.00
Total
RM0.00
Cart
Checkout
Continue Shopping
Free shipping for billing over RM99.00
0%