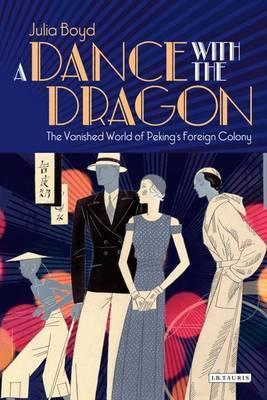 A Dance with the Dragon: The Vanished World of Peking’s Foreign Colony

With its wild, dissolute, extravagant group of fossil hunters and philosophers, diplomats, dropouts, writers and explorers, missionaries, artists and refugees, Peking's foreign community in the early 20th century was as exotic as the city itself. Always a magnet for larger than life individuals, Peking attracted characters as diverse as Wallis Simpson, Pearl Buck, J.D. Rockfeller, Jr., Bertrand Russell, Pierre Loti, Rabrindranath Tagore, Sven Hedin, Peter Fleming, and Cecil Lewis. The last great capital to remain untouched by the modern world, Peking both entranced and horrified its foreign residents - the majority of whom lived cocooned inside the legation quarter, their own walled enclave, living an extraordinary high-octane party lifestyle, suffused with martinis, jazz piano, and cigarettes, at the height of the Jazz Age. Ignoring the poverty outside their gates, they danced, played, and squabbled among themselves, oblivious to the great political events unfolding around them and the storm clouds looming on the horizon that were to shape modern China. Others, more sensitive to Peking's cultural riches, discovered their paradise too late when it already stood on the brink of destruction.


Although few in number, Peking's expatriates were uniquely placed to chart the political upheavals - from Boxer Rebellion in 1900 to the Communist victory of 1949 - that shaped modern China. Through extensive use of unpublished diaries and letters, Julia Boyd reveals the foreigner's perceptions and reactions - their take on everyday life and the unforgettable events that occurred around them. This is a dazzling portrait of an eclectic foreign community and of China itself - a magnificent confection, never before told, by one of literary London's great storytellers.
ISBN:9781780760520

You're viewing: A Dance with the Dragon: The Vanished World of Peking’s Foreign Colony RM35.90
Add to basket
Shopping Cart
There are no products in the cart!
Subtotal
RM0.00
Total
RM0.00
Cart
Checkout
Continue Shopping
Free shipping for billing over RM99.00
0%