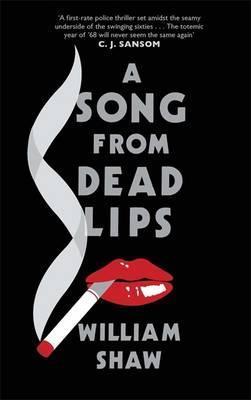 A Song from Dead Lips

London, October 1968. As Beatles fans encamp outside Abbey Road Studios up the road, the Marylebone CID is as much an old boys' club as it ever was: comfortably sexist, racially prejudiced and crawling with corruption.

Detective Sergeant Cathal Breen is the pariah of the office, having just run out on a fellow officer held at knifepoint, when it's shaken up by the arrival of WPC Helen Tozer: awkward chatterbox, farmgirl, and the first woman to enter the murder unit -apart from the secretary.

When a young woman is found naked and strangled in well-to-do St John's Wood, her identity is a mystery. The neighbours offer nothing but xenophobic suspicions, witnesses are staying silent; only Tozer's savvy gives Breen a lead.

Following it, resourceless, deep into the rural backwaters, Breen sees one dead body lead to another - a trail of bloodshed taking them dangerously close to a killer with everything to lose.

The first in a trilogy featuring DS Breen and WPC Tozer, set against a clashing backdrop of sixties idealism and a corrupted CID on the brink of exposure.

You're viewing: A Song from Dead Lips RM9.90
Add to cart
×
Item Added to your Cart!
Continue Shopping
Free shipping for billing over RM99.00
0%