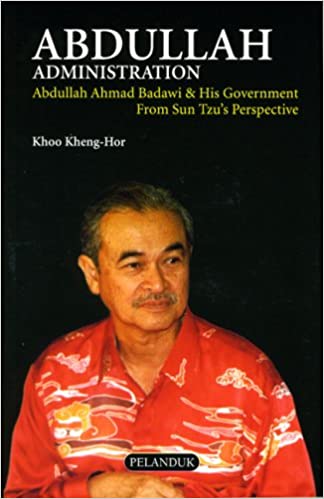 ABDULLAH ADMINISTRATION: Abdullah Ahmad Badawi & His Government From Sun Tzu's Perspective attempts to link the words and action of Malaysia's fifth Prime Minister Dato' Seri Abdullah Ahmad Badawi to those of Sun Tzu. It focuses on the first hundred days of Abdullah's leadership after becoming Prime Minister on October 31, 2003 and offers suggestions from the ancient military strategist's 2,500-year-old Art of War on what more could be done to propel Malaysia to greater heights. Written in his characteristic breezy style which has already earned Khoo Kheng-Hor a following among those seeking to learn the limitless applications of Sun Tzu's strategies, this book will be most insightful for those wishing to understand Abdullah's style of governance. In this book, Khoo makes it clear that it is not his intention to glorify the new premier but hopes to analyse his words and action, and those of his "merry men," with parallels to Khoo's life-long study of Sun Tzu's strategies to show where he thinks Malaysia is heading or should be heading. The fact that Khoo is not a member of any political party gives this book the credibility it deserves. ISBN:9789679788983