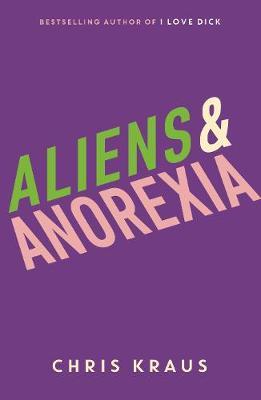 It's 1996, and Chris Kraus is in Berlin, seeking a distributor for her film Gravity & Grace, described alternately as 'an experimental 16mm film about hope, despair, religious feeling and conviction' and 'an amateur intellectual's home video expanded to bulimic lengths' ...

It's 1942 in Marseille, and Simone Weil is waiting for the US entry visa that will save her from the Holocaust, while writing work described alternately as a 'radical philosophy of sadness' and 'immoral, trite, irrelevant and paradoxical' ...

It's the late 90s, the millennium is approaching, and Chris Kraus is in Los Angeles, not eating, waiting for her s/m partner to reply to her emails ...

It's 1943, and Simone Weil is in London, completing her project of transcendence by dying of starvation ...

Filled with Chris Kraus' trademark wit and frankness, unfolding to reveal the lives of ecstatic visionaries and failed artists, Aliens & Anorexia is an audacious novel about failure, empathy and sadness. ISBN:9781788160070