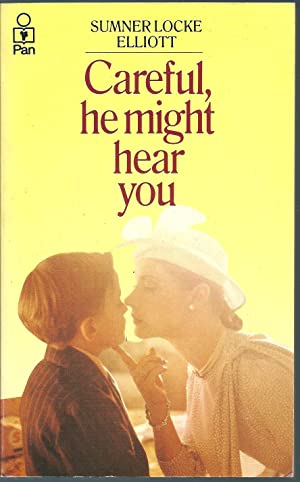 The story of a bitter strugle between two women for the possession of a six-year-old boy, written with tenderness, humour and irony.

It sounded through his half sleep like surreptitious mice foraging through tissue paper. It was as mysterious as the lateness of the hour â after nine o'clock â and only as far away as the kitchen door, ajar so as to hear him if he should call to them or have a nightmare.

He turned in bed, listening to the whispering undertones, as steady and continuous as a tap left running and broken only by a cough or sometimes a chair scraping back on the linoleum; then a dish being taken from a cupboard and now and then a voice would catch on fire and break adrift from the murmurings, but always with the same word, Vanessa, said sharply like hitting a brass gong at dead of night and then someone would say, 'Shhh, was that him? Did he call out?' and tiptoeing would startle the old floorboards while a shadow grew larger and larger on his wall; bent to hear if he was stirring and so, annoyed with their secrets, he would feign sleep until whoever it was retreated to the kitchen and the whispering hissed up again like damp green eucalyptus logs burning. ISBN:9780330270489

You're viewing: Careful, He Might Hear You RM9.90
Add to basket
Shopping Cart
There are no products in the cart!
Subtotal
RM0.00
Total
RM0.00
Cart
Checkout
Continue Shopping
Free shipping for billing over RM99.00
0%