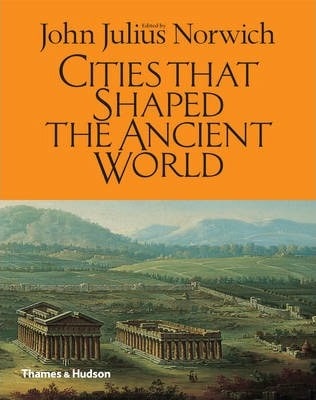 Today we take living in cities, with all their attractions and annoyances, for granted. But when did humans first come together to live in large groups, creating an urban landscape? What were these places like to inhabit? More than simply a history of ancient cities, this volume also reveals the art and architecture created by our ancestors, and provides a fascinating exploration of the origins of urbanism, politics, culture, and human interaction.


Arranged geographically into five sections, Cities That Shaped the Ancient World takes a global view, beginning in the Near East with the earliest cities such as Ur and Babylon, Troy and Jerusalem. In Africa, the great cities of Ancient Egypt arose, such as Thebes and Amarna. Glorious European metropolises, including Athens and Rome, ringed the Mediterranean, but also stretched to Trier on the turbulent frontier of the Roman Empire. Asia had bustling commercial centers such as Mohenjodaro and Xianyang, while in the Americas the Mesoamerican and Peruvian cultures stamped their presence on the landscape, creating massive structures and extensive urban settlements in the deep jungles and high mountain ranges, including Caral and Teotihuacan.


A team of expert historians and archaeologists with firsthand knowledge and deep appreciation of each site gives voices to these silent ruins, bringing them to life as the bustling state-of-the-art metropolises they once were. ISBN:9780500252048

You're viewing: Cities That Shaped the Ancient World (Pre-Order) RM160.00
Add to basket
Shopping Cart
There are no products in the cart!
Subtotal
RM0.00
Total
RM0.00
Cart
Checkout
Continue Shopping
Free shipping for billing over RM99.00
0%