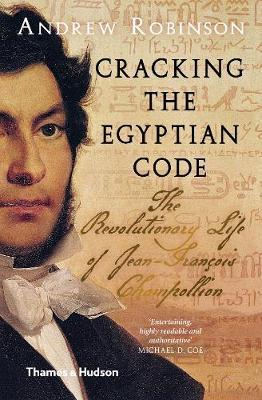 In 1799 Napoleon's army uncovered an ancient stele in the Nile delta. Its inscription, recorded in three distinct scripts--ancient Greek, Coptic, and hieroglyphic--would provide scholars with the first clues to unlocking the secrets of Egyptian hieroglyphs, a language lost for nearly two millennia. More than twenty years later a remarkably gifted Frenchman named Jean-Francois Champollion successfully deciphered the hieroglyphs on the stele, now commonly known as the Rosetta Stone, sparking a revolution in our knowledge of ancient Egypt.
Cracking the Egyptian Code is the first biography in English of Champollion, widely regarded as the founder of Egyptology. Andrew Robinson meticulously reconstructs how Champollion cracked the code of the hieroglyphic script, describing how Champollion started with Egyptian obelisks in Rome and papyri in European collections, sailed the Nile for a year, studied the tombs in the Valley of the Kings (a name he first coined), and carefully compared the three scripts on the Rosetta Stone to penetrate the mystery of the hieroglyphic text. Robinson also brings to life the rivalry between Champollion and the English scientist Thomas Young, who claimed credit for launching the decipherment, which Champollion hotly denied. There is much more to Champollion's life than the Rosetta Stone and Robinson gives equal weight to the many roles he played in his tragically brief life, from a teenage professor in Revolutionary France to a supporter of Napoleon (whom he met), an exile, and a curator at the Louvre.
Extensively illustrated in color and black-and-white pictures, Cracking the Egyptian Code will appeal to a wide readership interested in Egypt, decipherment and code-breaking, and Napoleon and the French Revolution. ISBN:9780500294178

You're viewing: Cracking the Egyptian Code: The Revolutionary Life of Jean-Francois Champollion (Pre-Order) RM49.90
Add to basket
Shopping Cart
There are no products in the cart!
Subtotal
RM0.00
Total
RM0.00
Cart
Checkout
Continue Shopping
Free shipping for billing over RM99.00
0%