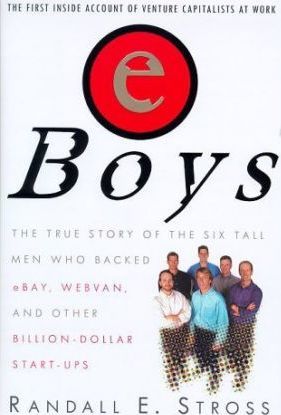 eBoys: the True Story of the Six Tall Men Who Backed eBay, Webvan,and Other Billion-Dollar Start-Ups

The first inside account of life within a Silicon Valley venture capital firm, eBoys is the fascinating true story of the six tall men who backed eBay, Webvan, and other billion-dollar start-ups that are transforming the Internet and setting a new pace for the economy.Randall Stross, author of acclaimed books on Microsoft and Steve Jobs, blends a business historian's perspective with a journalist's flair for suspenseful storytelling to look at wealth creation up close. For two years, Stross gained unprecedented access to the venture capitalists at Benchmark, an upstart firm founded by thirtysomething renegades whose average height happens to be 6Â´5Â´Â´. Since Benchmark's founding in 1995, each partner's net worth has increased, on average, $100 million annually. Stross was present as the Benchmark boys debated which businesses to support, and by recounting their conversations in testosterone-rich detail, he offers readers the most precise and enlightening account of the ways in which venture capitalists think, evaluate prospects, and wield influence.Stross also gained access to a number of the Benchmark-backed start-ups, including a small, privately held San Jose company called eBay. The value of the company grew from $20 million to more than $21 billion within two years of Benchmark's investment, an increase of 100,000 percent. Business Week called it "probably the best venture capital investment of all time."Venture capitalists have become iconic symbols of our time, just as investment bankers, investigative journalists, and hippies defined previous eras. In eBoys, Randall Stross has vividly captured the interplay of ambition, personality, experimentation, and risk, all acted out, larger than life, as the men of Benchmark and the entrepreneurs they back play their remarkable roles in the new world of Internet commerce and the creation of vast, sudden wealth. ISBN:9780812930955

You're viewing: eBoys: the True Story of the Six Tall Men Who Backed eBay, Webvan,and Other Billion-Dollar Start-Ups RM29.90
Add to basket
Free shipping for billing over RM99.00
0%