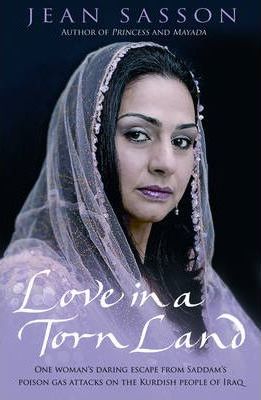 Love In A Torn Land

Best-selling author, Jean Sasson tells the dramatic true story of a young woman caught up in Saddam Hussein's genocide of the Kurdish people of Iraq. One morning Joanna, a young bride living in the Kurdish mountains of Iraq, was surprised to see dead birds drop silently out of the clear sky. They were followed by sinister canisters falling from helicopters, bringing fear and death. It was 1987, and Saddam Hussein had ordered his cousin 'Chemical Ali' to bombard Joanna's village, Bergalou, with chemical weapons. Temporarily blinded in the attack, Joanna was rescued by her husband, a Kurdish freedom fighter. After being caught in another bombardment and left for dead in the rubble, they managed to flee over the mountains in a harrowing escape. With Joanna now pregnant, the young couple lived as refugees for a year, before finally travelling to England on forged papers, and being granted political asylum. ISBN:9780385610872

You're viewing: Love In A Torn Land RM19.90
Add to basket
Shopping Cart
There are no products in the cart!
Subtotal
RM0.00
Total
RM0.00
Cart
Checkout
Continue Shopping
Free shipping for billing over RM99.00
0%