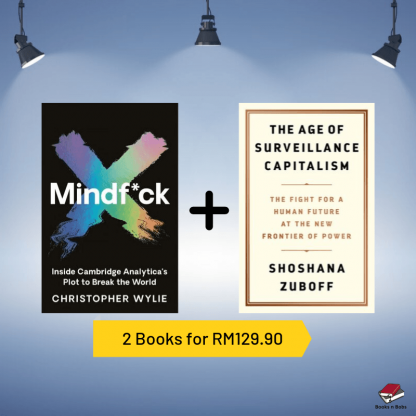 2 in stock (can be backordered)

Get the 2 book combo to enjoy a RM5 saving plus Free Shipping.

In 2016, an obscure British military contractor turned the world upside down. Funded by a billionaire on a crusade to start his own far-right insurgency, Cambridge Analytica combined psychological research with private Facebook data to make an invisible weapon with the power to change what voters perceived as real.

The firm was created to launch the then unknown Steve Bannon's ideological assault on America. But as it honed its dark arts in elections from Trinidad to Nigeria, 24-year-old research director Christopher Wylie began to see what he and his colleagues were unleashing.

He had heard the disturbing visions of the investors. He saw what CEO Alexander Nix did behind closed doors. When Britain shocked the world by voting to leave the EU, Wylie realised it was time to expose his old associates. The political crime of the century had just taken place - the weapon had been tested - and nobody knew.

For the first time, WYLIE, the Cambridge Analytica whistleblower, tells the inside story of the data mining and psychological manipulation behind the election of Donald Trump and the Brexit referendum, connecting Facebook, WikiLeaks, Russian intelligence, and international hackers.

Wylie?s decision to become a whistleblower prompted the largest data crime investigation in history. His story is both expose and dire warning about a sudden problem born of very new and powerful capabilities. It has not only exposed the profound vulnerabilities and profound carelessness in the enormous companies that drive the attention economy, it has also exposed the profound vulnerabilities of democracy itself. What happened in 2016 was just a trial run. Ruthless actors are coming for your data, and they want to control what you think.

?I thought I knew the Cambridge Analytica story backwards but reading Mindf*ck felt like having the lights switched on. There aren?t many people who understand the new landscape of political control like Christopher Wylie, and perhaps none who are willing to go on the record. Mindf*ck is an astonishing journey through the underworlds of modern power, lit up with savage humour and guided by a steely sense of purpose. Amid talk of riots on the streets, this is the riot we need.? - Ed Lake from Matilda Forbes Watson

Christopher Wylie has been called "the millennials' first great whistleblower" by The Guardian and "a pink-haired, nose-ringed oracle sent from the future" by The New York Times. He is known for his role in setting up - and then taking down - Cambridge Analytica. His revelations exposing the rampant misuse of data rocked Silicon Valley and led to some of the largest multinational investigations into data crime ever. Born in British Columbia, Canada, he studied law at the London School of Economics before moving into cultural data science and fashion trend forecasting. He lives in London, England.

The Age of Surveillance Capitalism

Shortlisted for the FT Business Book of the Year Award 2019

'Easily the most important book to be published this century. I find it hard to take any young activist seriously who hasn't at least familarised themselves with Zuboff's central ideas.' - Zadie Smith, The Guardian

The challenges to humanity posed by the digital future, the first detailed examination of the unprecedented form of power called "surveillance capitalism," and the quest by powerful corporations to predict and control us.

The heady optimism of the Internet's early days is gone. Technologies that were meant to liberate us have deepened inequality and stoked divisions. Tech companies gather our information online and sell it to the highest bidder, whether government or retailer. Profits now depend not only on predicting our behaviour but modifying it too. How will this fusion of capitalism and the digital shape our values and define our future?

Shoshana Zuboff shows that we are at a crossroads. We still have the power to decide what kind of world we want to live in, and what we decide now will shape the rest of the century. Our choices: allow technology to enrich the few and impoverish the many, or harness it and distribute its benefits.

The Age of Surveillance Capitalism is a deeply-reasoned examination of the threat of unprecedented power free from democratic oversight. As it explores this new capitalism's impact on society, politics, business, and technology, it exposes the struggles that will decide both the next chapter of capitalism and the meaning of information civilization. Most critically, it shows how we can protect ourselves and our communities and ensure we are the masters of the digital rather than its slaves.

Shoshana Zuboff has been called 'the true prophet of the information age' by the Financial Times for her ground-breaking book, In The Age of The Smart Machine. She is now the Charles Edward Wilson Professor Emerita at Harvard Business School as well as Faculty Associate at the Berkman Center for Internet and Society at Harvard Law School. In 2006, strategy+business magazine named her one of the eleven most original business thinkers in the world.