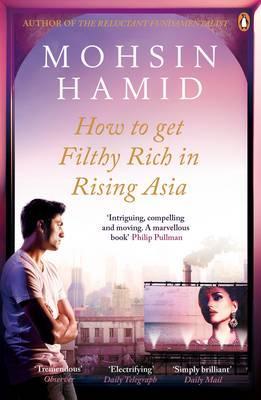 How To Get Filthy Rich In Rising Asia

From the internationally bestselling author of The Reluctant Fundamentalist, the boldly imagined tale of a poor boy's quest for wealth and love.

His first two novels established Mohsin Hamid as a radically inventive storyteller with his finger on the world's pulse. How to Get Filthy Rich in Rising Asia meets that reputation and exceeds it. The astonishing and riveting tale of a man's journey from impoverished rural boy to corporate tycoon, it steals its shape from the business self-help books devoured by ambitious youths all over rising Asia. It follows its nameless hero to the sprawling metropolis where he begins to amass an empire built on that most fluid, and increasingly scarce, of goods: water. Yet his heart remains set on something else: on the pretty girl whose star rises along with his, their paths crossing and recrossing, a lifelong affair sparked and snuffed and sparked again by the forces that careen their fates along.

How to Get Filthy Rich in Rising Asia is a striking slice of contemporary life at a time of crushing upheaval. Romantic without being sentimental, political without being didactic, and spiritual without being religious, it brings an unflinching gaze to the violence and hope it depicts. And it creates two unforgettable characters who find moments of transcendent intimacy in the midst of shattering change. ISBN:9780241144671

You're viewing: How To Get Filthy Rich In Rising Asia RM11.90
Add to basket
Free shipping for billing over RM99.00
0%