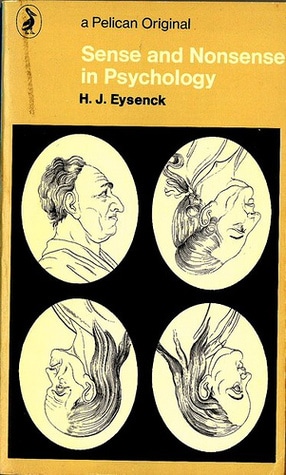 Sense and Nonsense in Psychology (1978)

In the 1st part of "Sense & Nonsense" the author takes the discussion further afield than "Uses & Abuses", dealing with matters such as hypnosis, lie detectors & truth drugs, the interpretation of dreams, even telepathy & clairvoyance. As always, his purpose is to sort out the wheat from the chaff. There's considerable discussion of the reliability of human testimony. Eysenck himself has experience in some of these areas. However, his conclusions have surprised & even annoyed some, especially the following much-quoted passage: "Unless there is a gigantic conspiracy involving some 30 university departments all over the world, & several hundred highly respected scientists in various fields, many of them originally hostile to the claims of the psychical researchers, the only conclusion the unbiased observer can come to must be that there is a small number of people who obtain knowledge existing either in other people's minds, or in the outer world, by means as yet unknown to science." The 2nd half concerns personality & social life. Dealing with the question of whether personality is measureable (yes), he considers its relation to conditioning, politics & esthetics. The Politics section demonstrates that attitudes logically unrelated often cluster together, showing similarities between two groups often regarded as opposites: Communists & Fascists. He proposes a 2-dimensional system of radical/conservative & tough-minded/tender-minded, showing where various contemporary attitudes lie. A thought-provoking book, still well worth reading. ISBN:9780140203851

Frequently bought with Sense and Nonsense in Psychology (1978)

Unhooked: How to Quit Anything RM21.90