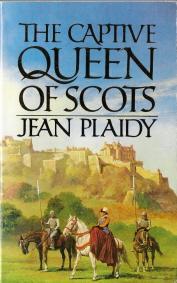 The Captive Queen of Scots

So begins Jean Plaidy's The Captive Queen of Scots, the epic tale of the Scottish Queen Mary Stuart, cousin to Queen Elizabeth of England. After her husband, Lord Darnley, is murdered, suspicion falls on Mary and her lover, the Earl of Bothwell. A Catholic in a land of stern Protestants, Mary finds herself in the middle of a revolt, as her bloodthirsty subjects call for her arrest and execution. In disgrace, she flees her Scottish persecutors for England, where she appeals to Queen Elizabeth for mercy, but to no avail. Throughout Mary's long years as the Queen's prisoner, she conceives many bold plans for revenge and escaping to freedom - but the gallows of Fotheringhay Castle loom . . .

Set against royal pageantry, religious strife, and bloody uprising and filled with conspiracies, passion, heartbreak, and fascinating historical detailThe Captive Queen of Scots is an unforgettable, page-turning tale of the intense rivalry between two powerful women of noble blood. ISBN:9780330370189

Frequently bought with The Captive Queen of Scots