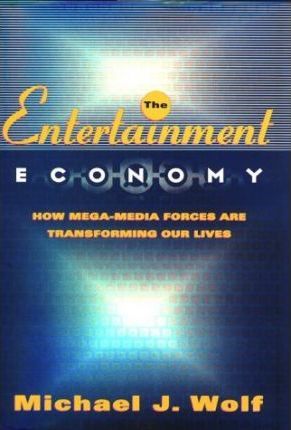 The Entertainment Economy: How Mega-Media Forces Are Transforming Our Lives

Every so often an author explains our culture in such a new and original way that from that day on we see the world around us in a new light. From "Understanding Media" by Marshall McLuhan through Nicholas Negroponte's "Being Digital," the books that have shown us the clearest vision of the future have been those that recognize the central role of mass media. In "The Entertainment Economy," Michael J. Wolf, the industry's most in-demand strategist, demonstrates that media and entertainment have moved beyond culture to become the driving wheel of the global economy. From New York to New Delhi, from London to Lagos, from Singapore to Seattle, every business is locked in the same battle for consumer attention that movie producers and television programmers deal with on a daily basis. Consumer businesses just like entertainment businesses have to turn to content for the competitive edge. As adviser to companies like MTV, Paramount, Hearst, NBC, Universal, News Corporation, Bertelsmann and the NBA, Wolf is known by industry insiders as the moguls' secret weapon. In clear, brash prose, full of real-life examples, Wolf shows how tomorrow's successful business person will have to act like a mogul in a global economy defined by hits and blockbusters.

From MTV to Ford Motor Company, from Tommy Hilfigger to Martha Stewart, from Stephen Spielberg to Richard Branson, Wolf shares the insights gained through his unique perspective as the founder of the world's largest media consulting practice, leaving no doubt that the watchwords for all consumer businesses in the 21st century are truly, "There's no business without show business." Written with equal degrees of business and popculture savvy, "The Entertainment Economy" is a book for everyone. ISBN:9780812930429

You're viewing: The Entertainment Economy: How Mega-Media Forces Are Transforming Our Lives RM14.90
Add to basket
Free shipping for billing over RM99.00
0%