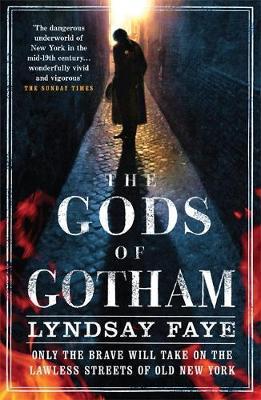 The Gods of Gotham

'Spectacular' Gillian Flynn. GODS OF GOTHAM is the fantastic first novel in Lyndsay Faye's Edgar Award-nominated series, for fans of Andrew Taylor and Antonia Hodgson's The Devil in the Marshalsea.

After a fire decimates a swathe of lower Manhattan, and following years of passionate political dispute, New York City at long last forms an official Police Department. That same summer, the great potato famine hits Ireland. These events will change the city of New York for ever.

Timothy Wilde hadn't wanted to be a copper star. On the night of August 21st, on his way home from the Tombs defeated and disgusted, he is plotting his resignation, when a young girl who has escaped from a nearby brothel, crashes into him; she wears only a nightdress and is covered from head to toe in blood. Searching out the truth in the child's wild stories, Timothy soon finds himself on the trail of a brutal killer, seemingly hell bent on fanning the flames of anti-Irish immigrant sentiment and threatening chaos in a city already in the midst of social upheaval. But his fight for justice could cost him the woman he loves, his brother and ultimately his life...

You're viewing: The Gods of Gotham RM11.90
Add to basket
Shopping Cart
There are no products in the cart!
Subtotal
RM0.00
Total
RM0.00
Cart
Checkout
Continue Shopping
Free shipping for billing over RM99.00
0%