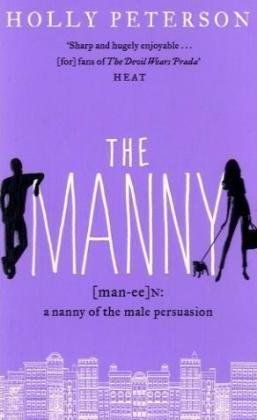 Guest Reviewer: Plum Sykes
Plum Sykes burst onto bookshelves in 2004 with her internationally-acclaimed bestseller Bergdorf Blondes, a novel in which she spotlighted the lives of New York's Park Avenue Princesses. Born in London and educated at Oxford, Sykes is a contributing editor at Vogue, where she writes on fashion, society, and Hollywood. She has also written for Vanity Fair magazine. Her latest novel is The Debutante Divorcee.

[image] [image] "If you want to see rich people act really rich, go to St. Henry's School for Boys at 3p.m. on any weekday." Or you could just read Holly Peterson's debut novel, The Manny. The first line of this rather delicious story sets us up for what is to come: a satire of money, marriage, men and mannys. ("The Manny" of the title is actually a male nanny, just another parenting trend for Manhattan's uber-rich.) Peterson's heroine is Jamie Whitfield, a middle class girl from middle America who, supposedly, married well. She works as a news producer and it is through her that we get an inside peek at Manhattan's silly rich. In Peterson's well-drawn world, Whitfield and her hotshot lawyer husband, Philip, inhabit a specific area of Manhattan's Upper East Side, dubbed `The Grid'. Although Jamie fell hard for Philip when they were in their twenties, little did she realize she was marrying a man who thinks making a million or so a year means he is poverty-stricken, whose personal vanity knows know bounds and whose preferred reading material is books with titles like How To Raise Children in an Affluent Environment. With the ghastly husband getting more revolting by the second, her son Dylan losing his confidence, and Jamie's work going wrong, it's not long before Peter Bailey, a thirty year old manny--who also happens to be outrageously sexy--enters the fray. Now, there is nothing more amusing than the posh girl falling for The Help, but upright Jamie holds out--for pages and pages and pages--determined not to cheat on her husband. But when Jamie discovers another Alpha Mom has seduced Peter in her linen closet during a play date, it seems only a matter of time before the inevitable happens. Peterson has a keen eye for the zeitgeist. She describes the world of the hedge-fund billionaires and their excessive desires with sharp precision and a steely honesty. She takes us to their children's lavish birthday parties, explores the exact kind of fringing their cushions require and even kindly translates their slang for us: "its wheels up at three" actually means "my private plane takes off at three o'clock". Though the detail of such an extreme lifestyle could become suffocating, at its heart the book has a more human crisis to explore--a marriage in jeopardy. The fun comes with the love affair with the Manny. It's Lady Chatterly's Lover for the beach. ISBN:9780007261680