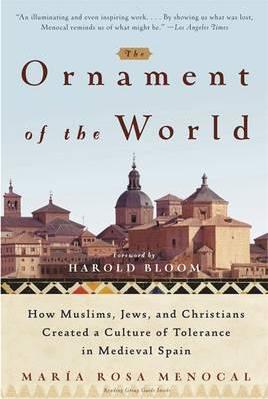 The Ornament of the World: How Muslims, Jews, and Christians Created a Culture of Tolerance in Medieval Spain

Undoing the familiar notion of the Middle Ages as a period of religious persecution and intellectual stagnation, MarÃ­a Menocal now brings us a portrait of a medieval culture where literature, science, and tolerance flourished for 500 years.The story begins as a young prince in exileâthe last heir to an Islamic dynastyâfounds a new kingdom on the Iberian peninsula: al-Andalus. Combining the best of what Muslim, Jewish, and Christian cultures had to offer, al-Andalus and its successors influenced the rest of Europe in dramatic ways, from the death of liturgical Latin and the spread of secular poetry, to remarkable feats in architecture, science, and technology. The glory of the Andalusian kingdoms endured until the Renaissance, when Christian monarchs forcibly converted, executed, or expelled non-Catholics from Spain. In this wonderful book, we can finally explore the lost history whose legacy is still with us in countless ways.

Author Biography: MarÃ­a Rosa Menocal is R. Selden Rose Professor of Spanish and Portuguese and head of the Whitney Humanities Center at Yale University. She lives in New Haven, CT.