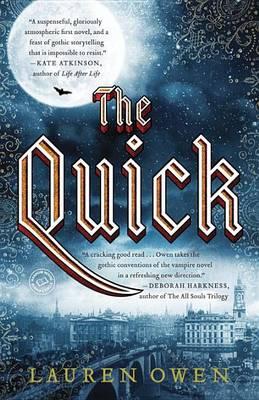 For fans of Anne Rice, The Historian, and The Night Circus, an astonishing debut, a novel of epic scope and suspense that conjures up all the magic and menace of Victorian London
Â
1892: James Norbury, a shy would-be poet newly down from Oxford, finds lodging with a charming young aristocrat. Through this new friendship, he is introduced to the drawing-rooms of high society and finds love in an unexpected quarter. Then, suddenly, he vanishes without a trace. Alarmed, his sister, Charlotte, sets out from their crumbling country estate determined to find him. In the sinister, labyrinthine London that greets her, she uncovers a hidden, supernatural city populated by unforgettable characters: a female rope walker turned vigilante, a street urchin with a deadly secret, and the chilling âDoctor Knife.â But the answer to her brotherâs disappearance ultimately lies within the doors of the exclusive, secretive Aegolius Club, whose predatory members include the most ambitious, and most bloodthirsty, men in England.
Â
In her first novel, Lauren Owen has created a fantastical world that is both beguiling and terrifying. The Quick will establish her as one of fictionâs most dazzling talents.
Â
From the Hardcover edition. ISBN:9780812983432