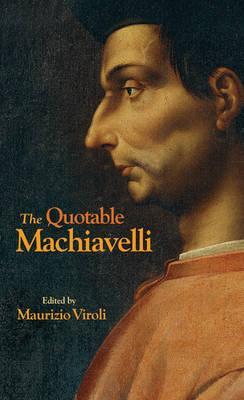 Niccolï¿½ Machiavelli (1469-1527) is the father of modern political thought, but he is also one of the greatest writers of the Renaissance and his wisdom and style extend far beyond politics to encompass a compelling philosophy of life as well. In The Quotable Machiavelli, Maurizio Viroli, one of the world's leading Machiavelli scholars, offers a rich collection of the Florentine's most memorable words on a wide range of subjects, including politics, the human condition, religion, love and happiness, antiquity and history, patriotism, and virtue. Drawing on Machiavelli's entire body of writings, and including little-known quotations as well as famous passages, the book shows the full scope of his thought and belies the cliche that he was a Machiavellian cynic. In addition to Machiavelli's own words on dozens of subjects of perennial interest, the book includes some almost unknown texts in which his contemporaries describe him. Complete with a biographical introduction, the book serves as a handy reference and a smart and lively introduction to a masterly thinker and writer.

Includes a rich collection of Machiavelli's most memorable words on a wide range of subjects, from politics to the human condition--almost 700 quotations in all
Edited and introduced by one of the world's leading Machiavelli scholars
Serves as a smart and lively introduction to Machiavelli's life and works. ISBN:9780691164366

You're viewing: The Quotable Machiavelli RM29.90
Add to basket
Shopping Cart
There are no products in the cart!
Subtotal
RM0.00
Total
RM0.00
Cart
Checkout
Continue Shopping
Free shipping for billing over RM99.00
0%