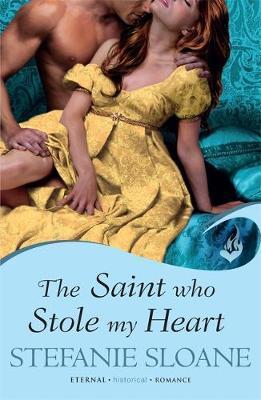 The Saint Who Stole My Heart: Regency Rogues Book 4

Dashiell Matthews, Viscount Carrington, remembers little of Miss Elena Barnes beyond her slight build, mousy character, and bookish ways. Her unavoidable presence at Carrington House would be inconvenient, true, but a woman could hardly prove enough of a distraction to interfere with what was the most important case of Dashâs lifeâferreting out the monster whoâd murdered a dear friendâs mother many year before.

Dash would, of course, live to regret such an assumption.

As for Elena, a trip to London to retrieve a priceless book is troublesome, though not nearly as much as the feelings the viscount inspires in her. His touch elicits feelings from Elena that sheâd only ever read about. Her skin tingles. Lord Hardwicke is as handsome as she rememberedâactually, more so as heâd grown into his frame in a rather attractive mannerâand as dim as a haâpenny tallow. Or is he? The more time Elena spends with the man, the greater her suspicions grow regarding his intellect and just what he might be up to as theyâre thrown together in the search for an individual known only as the Rook.

Can true love save the day? Find out in the exciting and enthralling fourth installment of the Regency Rogues. ISBN:9780755396658