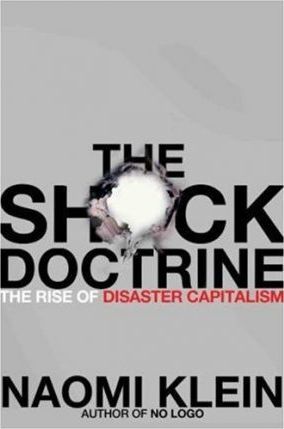 The Shock Doctrine: The Rise of Disaster Capitalism

The bestselling author of "No Logo" exposes the rise of disaster capitalism and destroys the myth of the global " free market"
In her groundbreaking reporting from Iraq, Naomi Klein exposed how the trauma of the invasion was being exploited to remake the country in the interest of foreign corporations. She called it " disaster capitalism." Covering Sri Lanka in the wake of the tsunami and New Orleans post-Katrina, she witnessed something remarkably similar. People still reeling from catastrophe were being hit again, this time with economic " shock therapy, " losing their land and homes to rapid-fire corporate makeovers.
In "Blank Is Beautiful," Klein explores the deeply rooted impulse to erase what is inconvenient and start over from scratch. This journey takes her back to two formative experiments in the 1950s, both funded by the U.S. government. One was a covert university research project in Montreal that blanked the minds of psychiatric patients through sensory deprivation and electroshock-- the basis of torture techniques from Pinochet' s Chile to Guanta namo Bay. The other was a program that turned the University of Chicago' s economics department into a factory for developing world politicians. Guided by Milton Friedman, students learned to remake their countries as laissez-faire utopias-- but only after what was there had been wiped away. Tracing the imposition of these ideas in the decades since, Klein explodes the myth that the global " free market" triumphed peacefully and democratically. Instead, she argues, it has consistently relied on violence and shock, resulting in the rise of disastercapitalism. ISBN:9780805086997