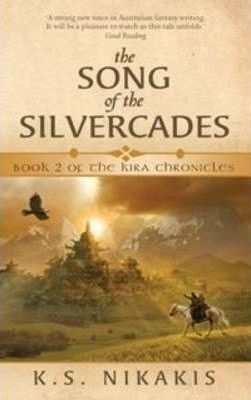 The Song of the Silvercades

The story of the young Tremen leader and her strugglesÂ to defendÂ her hidden homeland continues in book two of this epic fantasy series
Â
Deep in the southern forests, the Tremen are being viciously attacked by their neighbors, the Shargh. As the death toll mounts, gold-eyed Kira, the Tremen's most gifted healer, flees north to seek help from their long-lost warrior kin, the Terak. Even as her perilous journey has barely begun, Kira is forced to compromise her beliefs to rescue Caledon, a man driven by his faith in divine order and star patterns. In turn, his knowledge allows her to survive the perils of crossing the treacherous Azurcades. Kira soon realizes that he sees her as part of a celestial plan, and begins to mistrust his intentions. But not even Caledon can foresee what will happen when she meets the one man with the power to destroy all she has striven for. As the Shargh's most ancient prophecy comes to life, Kiraâand the Tremenâwill never be the same again. ISBN:9781741758931

You're viewing: The Song of the Silvercades RM13.90
Add to basket
Free shipping for billing over RM99.00
0%