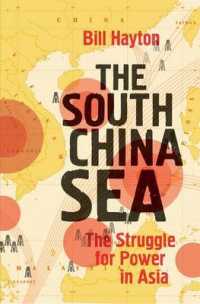 The South China Sea: The Struggle for Power in Asia

A discerning account of simmering conflict in the South China Sea and why the world can’t afford to be indifferent China’s rise has upset the global balance of power, and the first place to feel the strain is Beijing’s back yard: the South China Sea. For decades tensions have smoldered in the region, but today the threat of a direct confrontation among superpowers grows ever more likely. This important book is the first to make clear sense of the South Sea disputes. Bill Hayton, a journalist with extensive experience in the region, examines the high stakes involved for rival nations that include Vietnam, India, Taiwan, the Philippines, and China, as well as the United States, Russia, and others. Hayton also lays out the daunting obstacles that stand in the way of peaceful resolution. Through lively stories of individuals who have shaped current conflicts—businessmen, scientists, shippers, archaeologists, soldiers, diplomats, and more—Hayton makes understandable the complex history and contemporary reality of the South China Sea. He underscores its crucial importance as the passageway for half the world’s merchant shipping and one-third of its oil and gas. Whoever controls these waters controls the access between Europe, the Middle East, South Asia, and the Pacific. The author critiques various claims and positions (that China has historic claim to the Sea, for example), overturns conventional wisdoms (such as America’s overblown fears of China’s nationalism and military resurgence), and outlines what the future may hold for this clamorous region of international rivalry. ISBN:9780300216943

You're viewing: The South China Sea: The Struggle for Power in Asia RM67.90
Add to basket
Free shipping for billing over RM99.00
0%