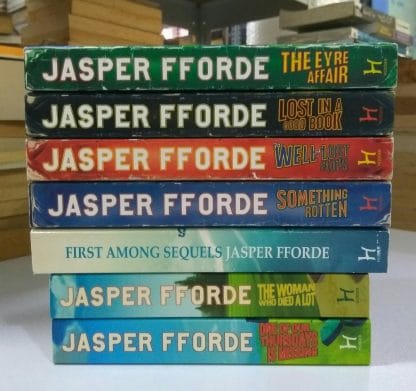 The set contains the complete seven books from the series:-
The Eyre Affair (2001) Lost in a Good Book (2002) The Well of Lost Plots (2003) Something Rotten (2004) First Among Sequels (2007) One of Our Thursdays is Missing (2011) The Woman Who Died a Lot (2012)
Thursday is the daughter of Wednesday Next and Colonel Next (whose first name has not yet been revealed), a former agent with Special Operations Network department 12 (SO-12), the Chronoguard. She has two brothers, Anton and Joffy. Anton, however, was killed in the Crimean War.

In her parallel universe, England is a republic, with George Formby as its first president, elected following the success of Operation Sea Lion (the mooted Nazi invasion of Great Britain), occupation, and liberation. There is no United Kingdom, and Wales is the independent "Socialist Republic of Wales". The Crimean War is still being waged in 1985, Russia still has a Czar, and the Whig Party still exists in the House of Commons.

Genetic engineering is far more advanced than in our own timeline, and so Thursday has a pet dodo, Pickwick. Re-engineered mammoths can cause damage to local gardens if in their path, and there is a Neanderthal rights movement, given the resurrection of this kindred branch of human evolution. The duck is extinct in this universe. Computer and aviation technology are far behind our own timeline, with the transistor having never been invented (computers are still massive and run on vacuum tubes) and research into the jet engine unfunded as propeller and dirigible technology are viewed as 'good enough'.

The Goliath Corporation is a megalithic company that appears to make many of the goods in this alternate world and also acts as a de facto shadow government, being able to take over important police investigations.

In the world of Thursday Next, literature is a much more popular medium than in our world, and Thursday is a member of SO-27, the Literary Detectives or LiteraTecs. Her work is centred on Swindon, where she, her husband, infant, and mother live. The importance that literature has in this alternate England is reflected in the fact that so many people want to change their name to that of famous authors that some must be numbered, by law- e.g. John Milton 432. 'WillSpeak' machines are often to be found in public places, such as railway stations - these contain a mannequin of a Shakespearian character and will quote that character's most famous speeches upon payment.

In addition, the line between literature and reality becomes increasingly thin, allowing characters in the books and those in 'real life' to jump in and out of novels. This leads Thursday to change the ending of Jane Eyre, the joke being that the plot we know in our reality is the far superior change caused by Thursday. This also happens to other classic novels: Uriah Heep becomes the obsequious, and generally insincere character we know, due to an accident inside the book world, and Thursday's uncle Mycroft becomes Sherlock Holmes's brother.

Thursday also finds that the characters in novels are self-aware, knowing they are in a book. They make comments stating they are not needed until page 'such and such,' rather like actors in a play, and thus have time to help Thursday.

The world of fiction has its own police force - Jurisfiction - to ensure that plots in books continue to run smoothly with each reading. Thursday ends up hiding in a book, and working for Jurisfiction. The book Caversham Heights is a detective novel featuring Detective Inspector Jack Spratt and his sergeant, Mary Mary, (listed as Mary Jones in WOLP) who swaps with Thursday. Spratt and Mary get their own Fforde series, The Nursery Crime Division books, and appear in The Big Over Easy and The Fourth Bear featuring crimes against characters in classic children's literature. 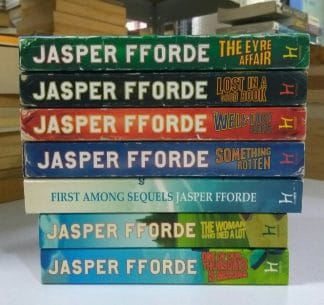 You're viewing: Thursday Next (Bookworld Series) RM129.90
Add to basket
Shopping Cart
There are no products in the cart!
Subtotal
RM0.00
Total
RM0.00
Cart
Checkout
Continue Shopping
Free shipping for billing over RM99.00
0%