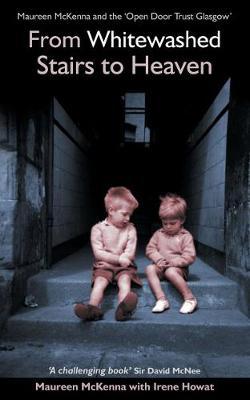 From Whitewashed Stairs to Heaven: Maureen McKenna and the ‘Open Door Trust Glasgow’

A promising national swimmer, Maureen McKenna, has to stop the sport she loves on medical grounds. Distraught, she kicks back at the world that has betrayed her. If the world had let her down then she was determined to beat it into submission and win out on her own terms.

A combination of commercial acumen and problem drinking saw this business high flier soar and crash - repeatedly. The cycle couldn't continue and Maureen became an alcoholic and involved in an abusive relationship that lasted 12 years. The world had won, again.

Without hope, aged 33, she joined Alcoholics Anonymous as a last resort and met a young man who told her about a surer kind of hope, one founded on faith. She listened but was still determined to do away with what she considered was her worthless life. Just as she was about to throw herself in front of traffic on a busy road, she felt a hand on her shoulder, physically restraining her from stepping off of the kerb. When she looked around, there was no one there. She phoned the young man she had recently met and became a Christian that day.

Maureen and Hugh (for that was the young man's name) later married and worked full time with homeless people, prostitutes and addicts in the streets of Glasgow. After 12 years they decided that the people that they met needed more than food and clothes, they needed a saviour to break the cycle of deprivation. In 1998 they set up Open Door Trust Glasgow.

Read about this amazing work in the urban underclass, a work that will challenge your pre-conceptions and move your heart with compassion. Share Maureen and Hugh's vision of service to making a change in the lives of those whom the world passes by.

You're viewing: From Whitewashed Stairs to Heaven: Maureen McKenna and the ‘Open Door Trust Glasgow’  RM15.92
Add to basket
Shopping Cart
There are no products in the cart!
Continue Shopping
Free shipping for billing over RM99.00
0%