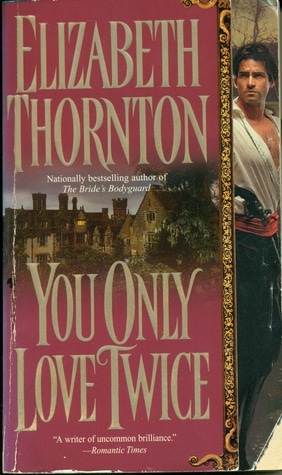 You Only Love Twice

Bestselling author Elizabeth Thornton triumphs with this thrilling blend of sensuous historical romance and heart-stopping suspense.
Â
For three years sheâs been a mystery even to herselfâa young woman who awoke in a London convent bereft of her memory. But now Jessica Hayword knows her name, her birthplace, and one other thing: By some terrifying twist of fate, she has the power to read anotherâs thoughtsâthe thoughts of a man who has killed and will kill again.

Convinced that she must unmask the murderer before itâs too late, Jessica goes home to Hawkshill Manorâand discovers that no one is happy about her return, especially the dangerously handsome earl Lucas Wilde. What kind of girl was she, Jessica wonders, to have earned such scorn? And whose murder is it that continues to haunt her? The deeper Jessica digs, the more scandalous details are revealed. Yet even as the clues point to Lucas as the killer, Jessica canât keep herself away from his embrace. And now all she can do is pray that the man sheâs falling in love with isnât the man whose deadly voice she hears in her dreams. ISBN:9780553574265

You're viewing: You Only Love Twice RM10.32
Add to basket
Shopping Cart
There are no products in the cart!
Subtotal
RM0.00
Total
RM0.00
Cart
Checkout
Continue Shopping
Free shipping for billing over RM99.00
0%