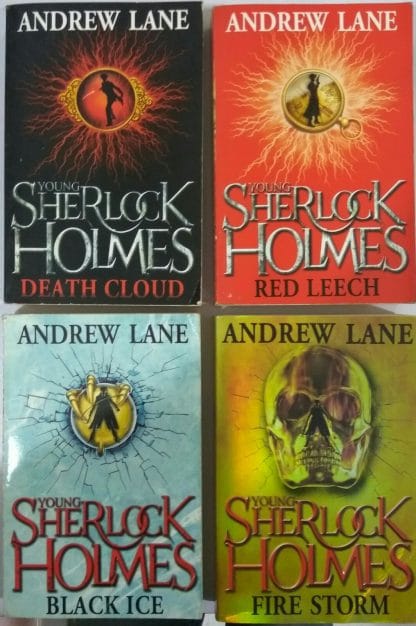 Young Sherlock Holmes is a series of young adult thriller novels by British author Andrew Lane featuring Arthur Conan Doyle's detective Sherlock Holmes as a teenager in the 1860s and 70s that is faced with numerous mysteries, crimes and adventures throughout the series.

Death Cloud: Fourteen-year-old Sherlock Holmes is sent to live with his Aunt and Uncle in Hampshire and teams up with Matty Arnatt to investigate two mysterious deaths which appear to be somehow related to a black cloud which Sherlock Holmes has to solve.

Red Leech: A few months after the events of the first novel, Holmes investigates the possibility that John Wilkes Booth is alive and well, and living in England. The investigation takes Sherlock to America with his tutor, Amyus Crowe.

Black Ice: Mycroft invites Sherlock and his tutor to London for a visit, but when they arrive at the Diogenes Club they find Mycroft with a dagger in his hand and a dead body on the floor. The adventure takes them from the depths of the London sewers to the frozen Russian landscapes.

Fire Storm: Fourteen-year-old Sherlock has come up against some challenges in his time, but what confronts him now is completely baffling. His tutor, Crowe, and Crowe's daughter, Virginia, have vanished. Their house looks as if nobody has ever lived there.